What Is Considered a Small or Narrow Lot in Perth? 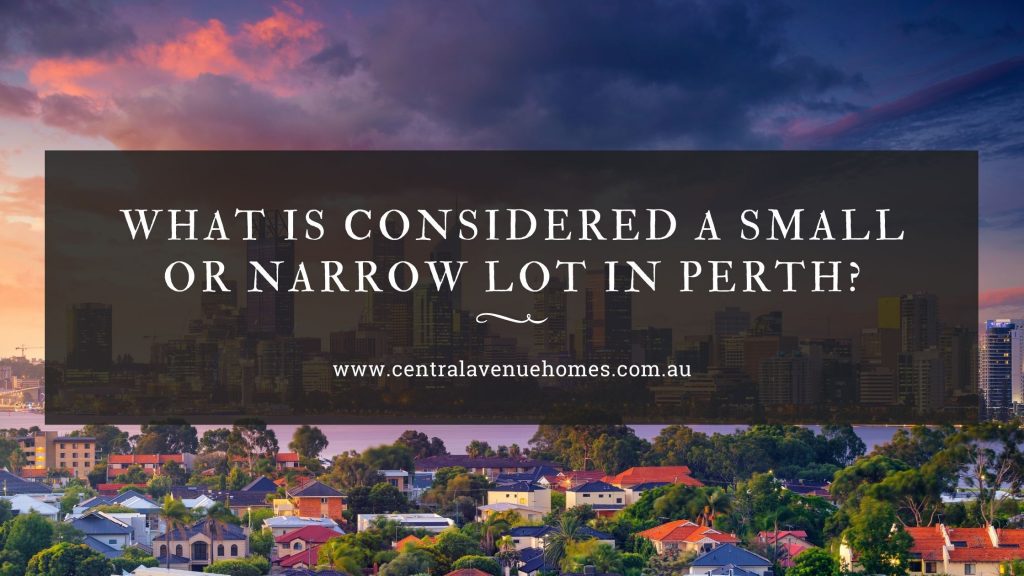 Looking at the property market in Western Australia, there’s one clear trend: the average lot size is gradually getting smaller. More and more often, building a new home in Perth is all about making the most of a small block. And this isn’t just in Australia – cities worldwide are seeing an increase in high-density living, designed to accommodate more people in urban and suburban areas.

Of course, many factors have fuelled this shift. The effects of an ever-increasing population and a change in preferences of home buyers have collided to fuel this demand for well-positioned small blocks. These days, it’s much more important to live in a great location than to maximise the square footage of your home. In fact, if you’re looking to buy a new home or purchase land, you may be interested in a smaller lot yourself. But what actually constitutes a ‘small lot’ in Perth?

Under Perth’s Liveable Neighbourhoods plan, there’s no official definition of what counts as a ‘small lot’. Different suburbs of Perth can have individual council planning codes, and therefore the typical, minimum and average lot sizes vary. The median lot size in Perth is 372 m2, so anything below this is on the smaller side, and narrow blocks are generally considered to be those under 15 m.

While some cities have a specific ‘small lot’ code regulating what can be built on narrow blocks, Perth has no official guidelines in this area, aside from the general requirements surrounding setbacks and boundaries. Let’s take a look at what’s usually considered a small block in Australia, and the information Perth authorities do supply about lot sizes.

What Is Considered a ‘Small Lot’ in Australia?

Just as a ‘small lot’ in one part of Perth may not be considered small in another suburb, different parts of Australia also have varying standards for what counts as a small lot. However, if we do need to generalise for the entire country, any lot less than 450 m2 or narrower than 15 m in width is generally considered small. Blocks with a frontage of 10 meters can commonly be found in densely populated areas, and specialist small lot builders have developed effective design techniques to create liveable homes on narrow blocks of land.

What Is Considered a Small or Narrow Lot in Perth?

As the median lot size in Perth is well below the 450 m2 benchmark, many blocks being developed in Perth will require skills and strategies specific to small lot builders. In practice, though, whether a lot is small or not depends on where you are in Perth.

According to Western Australia’s zoning policies, different areas of the state will have designated Residential Design Codes, or R-codes for short. A suburb’s R-code will determine many things about the possible residential development in that area, including the allowable lot sizes for houses.

Of course, the outer suburbs of Perth will tend to have larger lots than the inner suburbs. So what is considered to be a small lot there may actually be thought of as an average or even large lot close to the CBD. These places are inevitably more densely populated, so the R-codes allow for smaller lot sizes to provide enough housing to go around.

Let’s take a look at the three most common residential zoning codes or R-codes in Perth: R20, R30, and R40. The suburbs nearest to Perth’s central business districts tend to be R30 and R40 zoned. Meanwhile, the most common zoning for Perth’s suburbs is R20. Each of these R-codes will have a minimum lot size and an average lot size that must be met across an entire block or development.

These numbers come directly from Western Australia’s Department of Planning, Lands and Heritage and the Western Australia Planning Commission. As of the time of writing, neither has an official definition for what measurements would be considered a ‘small lot’. We only have the minimum lot sizes to work with, and generally available data on the average lot sizes in Perth – the median being 372 m2.

Ultimately, block sizes and site areas vary a lot from suburb to suburb. In fact, you may even be settling somewhere in Perth that isn’t R2, R30 or R40 zoned – there’s a whole range of less common R-codes that could apply to the area, so it’s always important to check the R-code and specific zone requirements for any block of land you intend to buy.

What Is the Average Lot Size in Perth?

The average lot size in Perth heavily depends on which suburb you look at. The median lot size in Perth is 372 m2, but naturally, there’s a wide range of lot sizes on either side of this midpoint. Perth’s outer suburbs will most often be zoned as R20 and lots can be more than double the land size in central Perth. Districts closer to Perth’s CBD are usually zoned as R30 or R40 themselves, and lot sizes reflect this higher density of living.

What Is a Micro Lot?

A micro lot is exactly what it sounds like: incredibly small lots explicitly designed for high-density housing. Although there is no official ‘micro lot’ category under Western Australia’s zoning law, a widely publicised experimental project back in 2018 put the micro-lot strategy to the test.

These tiny, tiny lots can even be as small as 80 square meters. The Western Australian government – specifically the WAPC – carried out the project with land developer LWP Property Group and home-builders Now Living. Together, they experimented with building and selling houses on micro parcels of land that were only 80 to 100 m2 in size.

These properties were open to buyers in the subdivision of Ellenbrook, northeast of Perth, where 11 micro lots were up for sale. The project aimed to trial a strategy to tackle the housing crisis, with an eye to more flexible future zoning and construction strategies. With parcels of available land shrinking and the cost of property ownership rising, the experiment aimed to prove that livability and housing quality need not be sacrificed even on the smallest blocks.

The project was actually an enormous success, demonstrating that it’s possible to achieve a high quality of life on a small and narrow parcel of land, but it may be a while before we see 80 m2 lots become a regular occurrence. It all comes down to the home’s design, and the right custom home builder can work wonders even on Perth’s narrow lots.

Does Perth Have a Small Lot Housing Code?

As of the time of writing, Perth does not have a small lot housing code, unlike many other cities in Australia. However, general building rules and requirements regarding minimum setbacks, site area and open space requirements must be taken into consideration for any residential or commercial development in Perth.

What Is the Smallest Lot You Can Build a House On?

As demonstrated by the success of the Perth micro-lot project, a comfortable, aesthetic, and perfectly livable house can be built on lots that are just 80 m2 to 100 m2 in size. Under typical circumstances, the highest-density residential zoning in Perth – R80 – allows for a minimum site area of 100 m2 per dwelling.

This article is published in good faith and for general informational purposes only. It does not take into consideration your individual circumstances and does not constitute an estimate for any specific project. Central Avenue Homes does not make any warranties about the ongoing completeness, reliability and accuracy of this information. Construction costs and other financial details vary and you should always seek a specific quote. 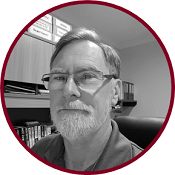 Greg has over 40 years of experience in the WA building industry starting as a carpenter joiner. He is entrenched in the local industry and has served on the board for MBAWA (Master Builders Australia WA) for over 10 years and was a founding director of Wesbuilders Cooperative for over 11 years. With this experience he is able to quote accurately on new projects without the huge increase to provisional sum allowances. 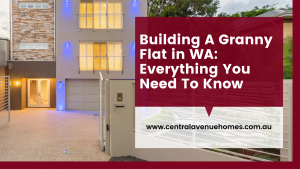 Building A Granny Flat in WA: Everything You Need To Know

Are you one of many Aussies trying to maximise your backyard by building a granny flat? You’ve probably heard about all the great benefits a 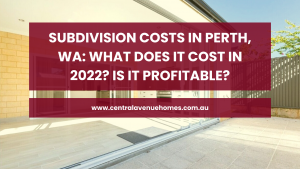 Subdivision Costs in Perth, WA | What Does It Cost in 2022? Is It Profitable?

Subdividing your property is a strategic way to infuse new life into an existing block of land. Thanks to Perth’s ongoing urban sprawl, there are

Made with ❤ by My Online Guy